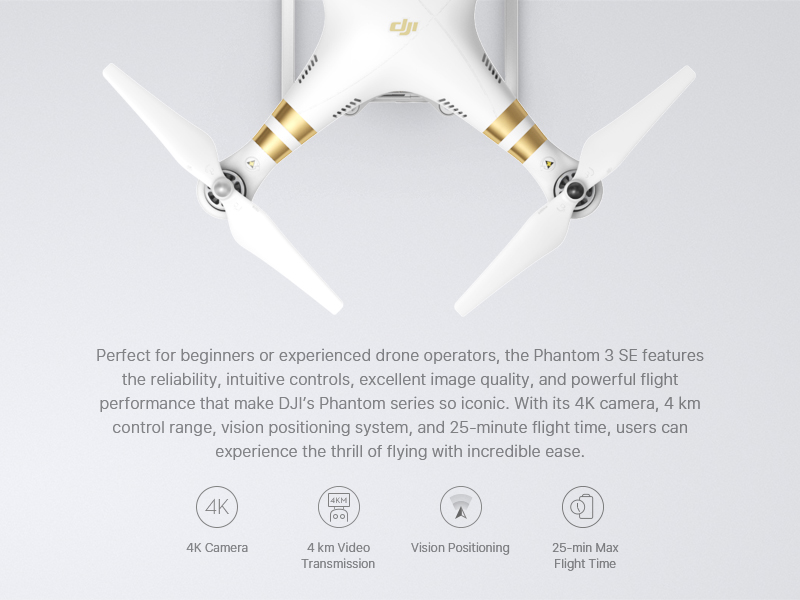 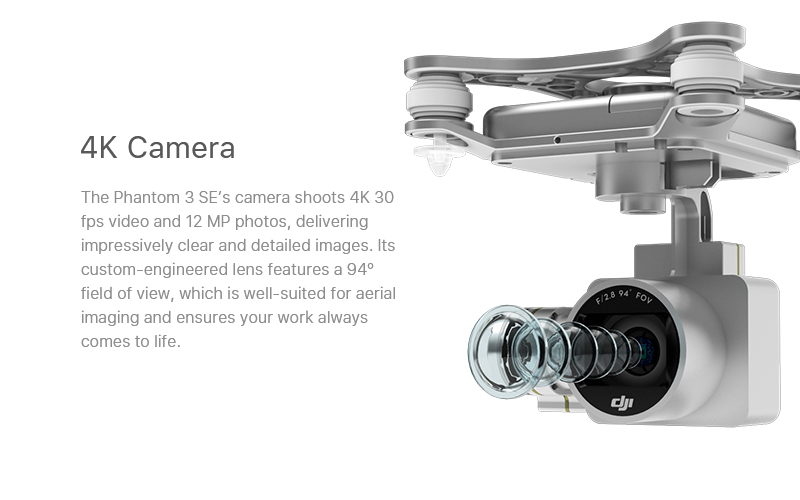 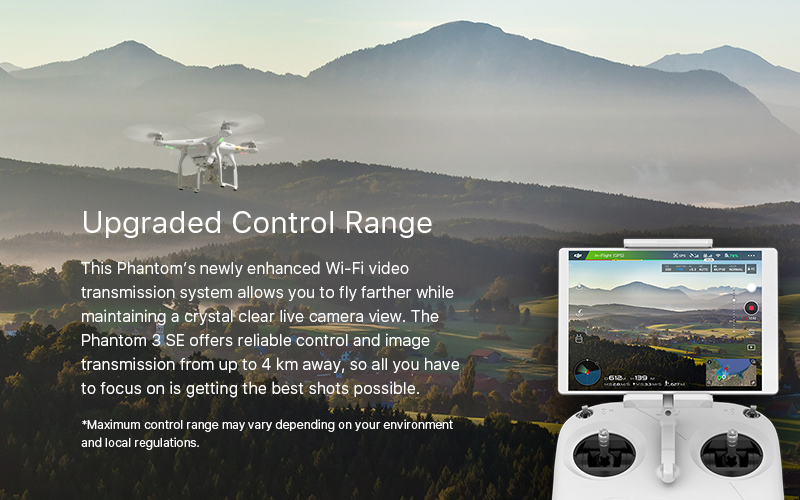 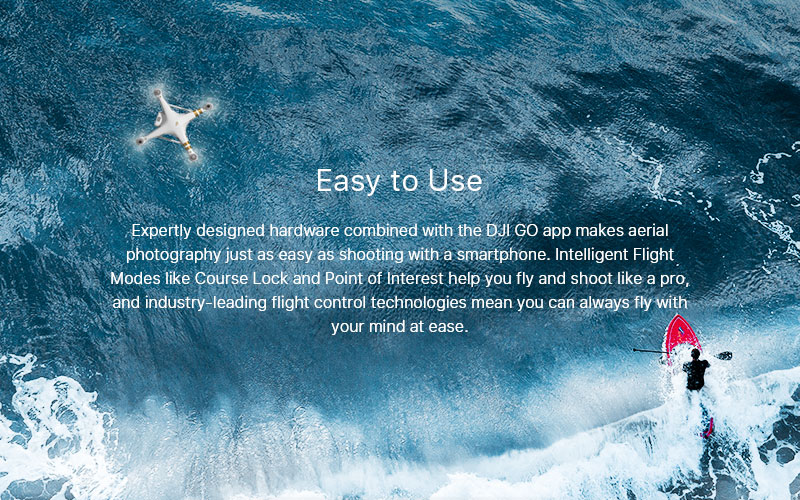 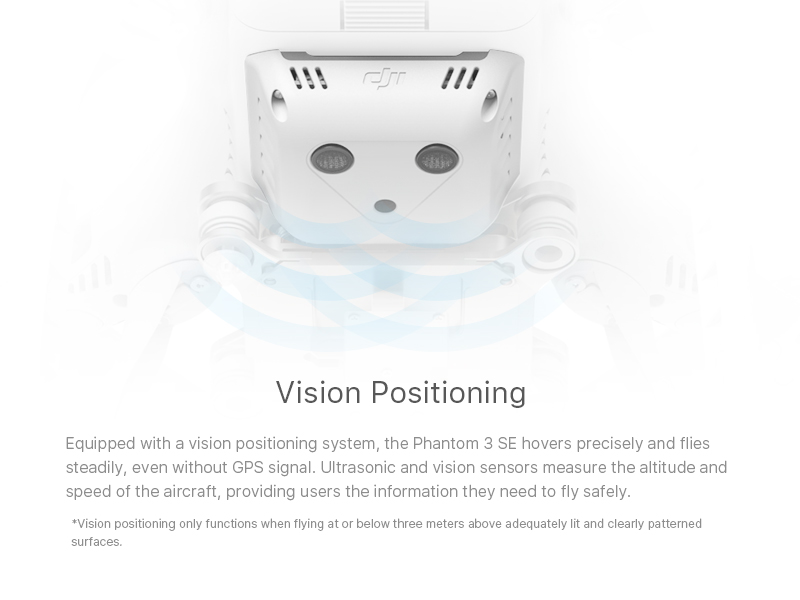 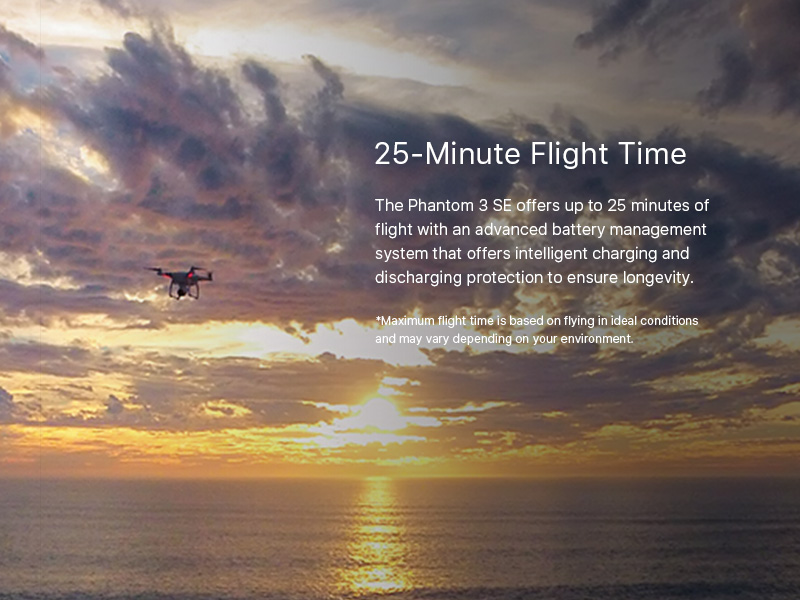 *Accessories are not covered by warranty.

The Phantom 3 SE is the most streamlined addition to the Phantom 3 series yet. It connects to the DJI GO app via Wi-Fi with maximum a video transmission range of up to 2.5 mi (4 km), and it has a 4K video camera. Also, its vision positioning system helps the Phantom 3 SE hover and fly stably indoors or in areas without GPS.

The Phantom 3 Standard also connects to the DJI GO app via Wi-Fi. However, its camera only shoots 2.7K video, its video transmission range is only 0.5 mi (1 km), and it has no vision positioning system.

Which app is used to control the Phantom 3 SE? DJI GO or DJI GO 4?

DJI GO, rather than DJI GO 4, is compatible with the Phantom 3 SE on both iOS and Android when using a supported mobile device. After a mobile device is connected to the aircraft’s Wi-Fi, users can view live video from the camera, adjust settings, and control the aircraft using the app.

What do the switches on the top of the remote controller do?

These are the S1 and S2 switches.
The S1 switch allows you to change between the aircraft’s three flight modes: P-mode, A-mode, and F-mode. More information about these modes can be found in the user manual. Beginners are advised to keep this switch at its uppermost position (P-mode) during flight.
The S2 switch can be used to trigger Return to Home. During flight, toggle this switch up and down once, and the Phantom 3 SE will to return to the Home Point and land when GPS signal is sufficient.

Can I use Intelligent Filght Batteries from other Phantom 3 series aircraft with the Phantom 3 SE?

Yes, all Phantom 3 series aircraft use the same batteries.

What is the maximum transmission distance of the Phatom 3 SE remote controller?

Maximum transmission distances will vary depending on environmental conditions and local regulations, but users can control the Phantom 3 SE from up to 2.5 mi (4 km) away.

What is the Phantom 3 SE’s flight time?

Flight times will vary depending on environmental conditions and flight modes used, but one fully charged Intelligent Flight Battery can provide up to 25 minutes of flight time.

Can I remove the Phantom 3 SE’s camera and attach another camera?

No. Attempting to remove, replace, or modify the camera may damage the product and will void your warranty.

How do I change the Phantom 3 SE’s control stick mode?

By default, the remote controller is set to Mode 2. This means that the right stick controls leftward, rightward, forward, and backward movement while the left stick controls altitude and orientation. The stick mode can be changed to Mode 1, Mode 3, or a customized configuration in the DJI GO app. Changing the stick mode is only recommended for advanced users.

Are other Phantom 3 series remote controllers compatible with the Phantom 3 SE?